Over the past 5 years (as of August 2020) US shares delivered a whopping 21% per year compared to a more modest 8% per year from Australian shares. This has led to a swarm of investors flocking into overseas shares and global ETFs.

With all of the talk about Facebook, Amazon, Apple, Netflix and Google (commonly known as the FAANG) stocks, you could be excused for thinking that investing in Australia was no longer the thing to do.

In spite of the excitement around overseas markets, Australian shares still form a key part of our portfolios. We believe they should remain the dominant growth asset for Australian based investors.

There are many reasons to continue owning Australian shares but here we’ll focus on two.

First, they have consistently generated great long-term returns compared to other investment choices. 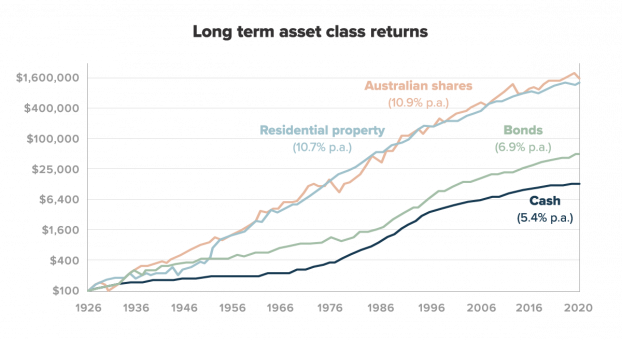 Over the last 94 years Australian shares have delivered annualised returns of 10.7% on average, beating returns in property, bonds and cash. There have been swings and roundabouts along the way, but for a long-term Australian investor there has been no broad asset class with better returns.

Keep in mind this doesn’t include the benefit of franking credits, which can add another 0.5% to 1.0% per year in returns for Australian investors.

The franking credit system was introduced in 1987 with the aim to prevent the double taxation of dividends. Companies paying tax in Australia can distribute tax credits to their investors to reduce the tax rate on dividend income to that of the end investor.

Through history Australian shares have undergone periods of beating and then underperforming global shares.

These ebbs and flows are a perfectly normal part of investment market cycles. It doesn’t mean there’s something wrong with Australian companies. Typically it has been after an extended period of underperformance like 2000 when Australian shares have had their best returns. If history is anything to go by, the upcoming decade could favour Australian shares over global shares. 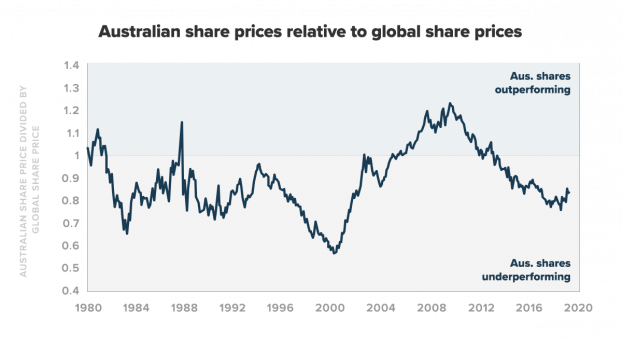 In 2000 property rental returns were roughly the same as Australian share dividend returns of 5%. However rental yields have fallen, meaning owners get a lower rental return each year. Recently the rents in capital cities have declined to around 3.3% per year (source: CoreLogic). The dividend return from a diversified portfolio of Australian shares (including franking credits) is around 4% per year. Even in tough market conditions (such as COVID-19), Australian share dividends have provided a better income return than other assets like residential property and cash. 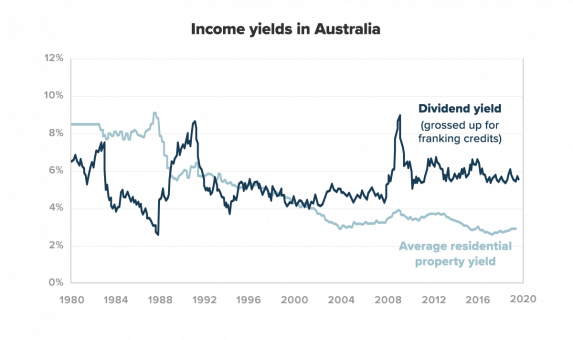 Still tempted to load your portfolio up with global stocks? You could face another issue. If you only own global shares you are exposed to other countries’ share market moves and their currency fluctuations.

As an Australian most of your expenses and liabilities are likely to be in Australian dollars. Having too much invested overseas can cause a mismatch between what you own and what you owe. Even if global share prices rise you face the risk of losing your ‘purchasing power’ in Australia if foreign currencies fall. This was clearly evident from March 2020 to August 2020 where the USD fell 30%, while the S&P 500 index also rose 60%.

The Stockspot portfolios aim to minimise risk for each level of returns. To do this the portfolios weight 45% to 70% of their growth investments to the local market. We estimate these to be the best ‘risk minimising’ allocations. Any more than this and the quality of your returns is likely to be diminished.

Our clients who want to dial up their global exposure can do so using Stockspot Themes however we still manage for risk to ensure that they don’t have too much of their portfolio parked overseas. For our growth portfolios, we will sell down some of your Australian share exposure in favour of global themes.

There’s a place for global shares too

One good reason to invest in overseas markets is to reduce ‘home country bias’ in portfolios.

75% of Australian investors only hold Australian shares, whereas our share market makes up only 2% of the global market.

Historically Australians have an overwhelming majority of their money invested locally in shares like Telstra, the banks and BHP. This has led to a high reliance on particular sectors of the Australian economy for returns and is a risky strategy.

To address this risk in our portfolios, we currently allocate between 30-55% of growth assets to global shares to improve diversification and reduce country and sector concentration risks. 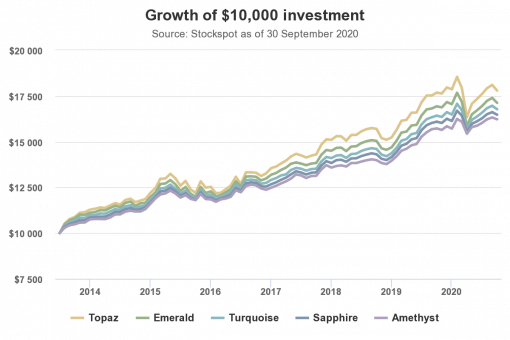 While it’s tempting to write off Australian shares because of their performance since 2010, just because it hasn’t been Australia’s time in the sun over the last 10 years doesn’t mean they won’t shine over the next 10 years.

Many people (including professional fund managers) were pessimistic about US shares back in 2009 after the financial crisis, but since then their share market has risen by over 350%. In a similar way it is easy to dismiss Australian shares today, but this kind of ‘rear vision mirror’ investing is likely to mean you miss out on future returns.

Global shares definitely belong in an Australian’s portfolio, however ignoring Australian shares to buy only global stocks means you’ll likely be disappointed when Australian shares catch-up. As we have shown, recent past performance is not a good indicator of future returns.

Australian shares continue to be a significant part of the Stockspot portfolios due to their attractive return, risk and income qualities.