Given 2016 was the hottest year on record, Australia claiming the highest the gambling rate in the world and the recent scandals about labour standards, it’s fair to ask yourself:

“Are the companies I invest in helping the world?”

Known as ethical investing, sustainable investing or green investing, socially responsible investing is an investment strategy that considers both financial return and social good to bring about social change.

Its history is believed to date back to the Quaker Society in the late 18th Century when members were banned from participating in the slave trade. Seems fair enough today. Back then, it was a bold statement.

Fast forward a few hundred years we saw people question the ethics of companies during the Vietnam War. Dow Chemical, a napalm producer, was boycotted and the subject of protests across America for its war profiteering when a photo was released of a nine-year-old girl running naked and screaming with her back on fire from the napalm dropped on her village.

Recently fast fashion brands like H&M and Zara are under scrutiny for labour rights violations, some ethical funds have stopped investing in these brands.

People’s idea of what socially responsible investing is can often be different. This makes ethical investing tricky because funds can invest quite differently.

You may want a fund that avoids fossil fuels. There are plenty. However those funds may invest in companies involved in gambling or cigarettes – which you may oppose.

The IQ MSCI Australian Ethical fund states it doesn’t invest in ammunition or tobacco – both serious killers. That’s great, apart from the small fact there are no ASX listed ammunition or tobacco manufacturing companies in Australia. Dig deeper and you find the fund invests in fossil fuel production which may not fit your definition of ethical.

Most ethical funds invest in the tech giants like Apple and Google which book much of their global profit in tax havens to avoid paying tax in the local jurisdictions in which they operate.

Equally, Australian banks feature heavily in most ethical fund portfolios despite the spate of recent scandals exposing how poorly they treat their customers. How ethical is withholding insurance from dying insurance customers?

You need to look carefully at where ethical funds invest to make sure it aligns with your world view and values. Beautiful photographs and emotive words on a website don’t necessarily translate to a fund operating within your definition of ethical investing.

How have ethical funds been growing?

The past 20 years there’s been a steady increase in funds targeting people who want to invest with social responsibility, moral or ethical philosophy. Ethical investing is now big business with many billions of dollars invested in ethical funds in Australia. 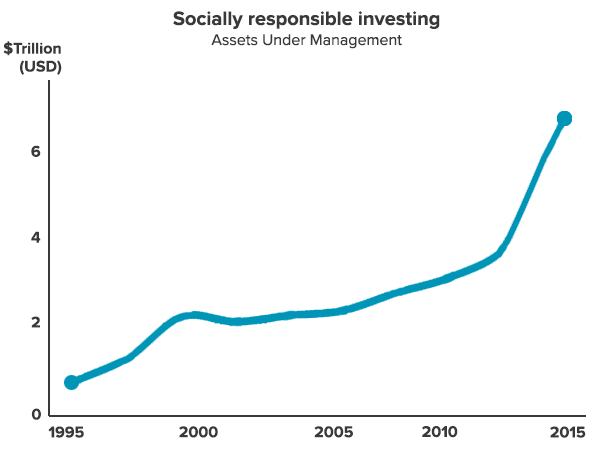 The Responsible Investment Association of Australia (RIAA), estimates there is over $6 trillion invested in ethical strategies around the world.

Are they making good returns?

One reason for the better performance of many ethical funds since about 2010 is an absence of companies like BHP Billiton and Rio Tinto on account of their investments in fossil fuels and coal seam gas.

Both stocks have underperformed the market which has helped ethical funds perform well. If this trend reverses, ethical funds are likely to lag again, particularly those charging high fees.

Some socially responsible funds charge, in our view, outrageous fees for access to their ethical investment process. Their hope is that people who care about the environment won’t mind that fees are eroding their investment.

We have written extensively about the impact of fees and ethical investing isn’t any different. It is well documented in academia and research including in our Fat Cat Funds Report that any fund charging upwards of 1.5% per year in management fees will inevitably struggle to deliver even market returns over the long run because of the drag of costs.

Given this, we would question whether it is ethical for any fund (and particularly an ethical fund) to charge over 1.5% per year in fees, regardless of its social objective.

We offer a socially responsible ETF to clients eligible for Stockspot Themes. The Russell Australian Investment ETF (ASX:RARI) that we offer is weighted towards companies that show a positive environmental, social and governance characteristics. It avoids companies significantly involved in activities that are inconsistent with widely recognised responsible investment considerations.

We like this fund because it charges a relatively low management fees of 0.44% per year and is true to its label. It excludes companies involved in gambling which is a growing social problem in Australia. This means Woolworths, Crown and Aristocrat are excluded. Woolworths (if you weren’t aware) is the biggest owner of poker machines in Australia.

BetaShares recently launched the Global Sustainability Leaders ETF (ASX:ETHI) which invests in 100 large global stocks (outside of Australia) that are climate change leaders. This gives Australians a socially responsible ETF with an international flavour. This fund charges 0.59% per year.

What are your values?

When investing in a socially responsible fund you should consider your personal values and make sure they match up with what you’re investing in. Fees should also be a consideration when selecting an ethical fund.

Can ETFs make the world a better place?ETF issuers have become much more active when it comes to their voting rights.